The second quarter of the year witnessed the occassion of ASSBIFI’s CWC/NEC meetings which was held at Ibadan, the Oyo State Capital in Nigeria. It was an eventful outing as the largest city in West Africa played host to our great Association with its calm and serene ambience.

The historical city of Ibadan 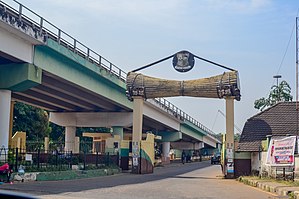 Ibadan is located in south-western Nigeria, 128 kilometres (80 mi) inland northeast of Lagos and 530 kilometres (330 mi) southwest of Abuja, the federal capital. It is a prominent transit point between the coastal region and areas in the hinterland of the country. Ibadan had been the administrative centre of the old Western Region since the early days of British colonial rule, and parts of the city’s ancient protective walls still stand to this day.

Did you know that the Secretariat and some of the CWC/NEC members travelled from Lagos to Ibadan and vice versa via the mordernized train carriage developed by the Federal Government of Nigeria?

Ibadan is known for its hospitality and rich culture, it is also home to Nigeria’s foremost University, University of Ibadan, which happens to be the location of our 2021 2nd Quarter CWC/NEC Meetings.

Shortly after the arrival of the delegates and other participants, the CWC held their meeting at approximately 3PM on the 20th of August, 2021. Issues were delibrated upon and positions where taken which would be presented to the NEC for further discussions and ratifications. The meeting ended at about 7PM.

Saturday, 21st of August, 2021 was slated as the day for the NEC Meeting, it was held within the ground of UI Hotels Limited, University of Ibadan, Ibadan, Oyo State.

Much issues were deliberated upon, including the emerging threats of COVID-19 working conditions and high costs of living for our members, and in extension, the citizens of our great Nation Nigeria.

Despite the heavy rainfalls, the event went on smoothly as members retired to their various abode to prepare for the return trip to Lagos and other zones.

Be your Brother’s Keeper

We call on all members and workers in the financial industry to take up the call of being a whistleblower against bad practices in the workplace. Your silence may have a deadly repercussion. #SeeSomethingSaySomething